We are thrilled by the aquisition of Delilah and the possibilities that her cria may offer our breeding program. She is due in a week or so. It was a pleasure doing business with Mike and Julie Delaney.

Irish Meadows is a lovely alpaca ranch, wonderful old buildings that are maintained to perfection, beautiful animals, a well stocked gift shop. They were remodeling a granary to house new offices and a bigger gift shop stocking Julie’s fiber, and alpaca products.

So on to our other ranch news. As posted previously, we moved 4 of our herd to the farm in Butler. Ace, Mousse, Hope, Zorro and the two LGD Great Pyrenees; Odin and Thor made the move for Open Barn days on the 28th and 29th of September. They have all settled in and have adjusted to our feeding schedule, the new barn and paddock and having Allie interact with them all day long, along with Pete and Maddie.

We left the three pregnant girls, Reina, Athena and Delilah at Alpacas of Indian Point Hills outside of Petersburg, Illinois. Since none of us had actually witnessed a live birth we decided it was in the best interest of our herd to leave them there until they gave birth, in experienced hands.

Allie’s boyfriend, Daryl, lives in Canada, north of Calgary and she requested a “long” weekend. Our girls weren’t due for 2 weeks so we thought we were in a “safe zone”. We really didn’t even worry when Bart and Rhonda told us that they were going to go to the big auction in Ohio at Magical Farms. Hey, those girls weren’t due quite yet……

Michael and I were in Butler, 45 min. from Springfield and an hour and a half from the pregnant girls.  Bart and Rhonda and Allie all left on their “get aways” on Thursday. Friday passed with regular farm chores, lounging around for me, and Michael doing the feeding, medicine giving and mucking out the stalls.

Saturday began with a downpour. Some thunder, lightening and sheets of rain pounding down on the prairie grass in front of the Big House. I decided I would not get dressed but sit at the dining room table and learn a program I acquired for writing called Scrivener. I had my “Dummies” book out, highlighter in hand, flannel jammies on and hair in a bun. Michael was watching pre-game shows for his football game. Calm, lazy day.

Then the cell phone rang, I looked down and saw Rhonda was calling from Ohio. WAIT! RHONDA IS CALLING FROM OHIO!!!!!!!!!!!!

“Lynne, Reina is in labor and delivering, ” Rhonda said.

“OMG Rhonda, she can’t be, she is 17 days from delivering” I screamed.

“Nope she is delivering now”

“OMG I am on my way!” I shouted as I began running to get dressed.

I did put my contacts in, I grabbed a pair of leggings and shirt…slipped on ballet flats, grabbed a pair of white socks, my purse, filled a coffee cup, called Liz and directed her to get out to Bart and Rhonda’s, grabbed my keys, my Muck boots, kissed Michael goodbye and ran for the car!

In the car, thank gods for bluetooth, Allie called me from Canada. Doing her best to keep me calm. Normally the drive to Springfield is 45 min. I made it in 30 and usually it is another 30 min to Bart and Rhonda’s but I made it in 15 min. I did not get a ticket, for that I am grateful.

Arriving at the farm, I slipped my socks and Muck boots on and headed to the barn. Rhonda’s mom was on the cell phone with Bart, she handed it to me and I listened to what Bart wanted me to do. I said, “Ok” and headed in.

Liz was on the ground with the cria already in a cria coat on the ground and NOT moving. Not flopping, not struggling to sit up. Reina had been tethered and was frantic. Liz was blow drying the baby, we did not know the sex. The space we were in was confining so I thought it would be better to move out into the sun and into the bigger pasture. I told Liz we needed to move them. I untied Reina and scooped up baby and we headed out to the pasture.

I laid baby down in the pasture and began rubbing frantically. Liz peeked and we determined it was a girl and we took turns trying to warm her up and get her moving. Reina stood guard clucking and dipping her head to nuzzle baby and remembering what Bart had said, I flipped up the back of the cria coat so Mama could smell her bottom.

About an hour later, standing her up and trying to get her legs under her I looked at Liz and said, “I wonder if this cria coat is too heavy for her? Maybe she thinks she can’t  move because it is too heavy.” We had a standard poodle once who had to have a cone on his head because of ear infections and he refused to move with the cone around his neck….just his eyes would move. LOL!

So off came the cria coat. We rubbed some more and violá, she moved!! But Bart said she needed to nurse. Reina stood by patiently. I held her and rubbed her neck while Liz tried standing her.

In the meantime Rhonda and Bart had called the vet and called to tell me that she was on her way. She arrived about 2 hours after we had gotten out into the pasture. Thank goodness! We did not know that we needed to strip her teats in order for baby to get milk. The vet saved us! Liz filmed it and watched while I held Reina. Baby got up there and the more she nursed, the better she got! WOOOHOOO!

Unfortunately, baby was so weak and the vet suggested we take her home in order to make sure she was eating about every 2 hours. SO, I had to call Michael and have him bring the trailer to come get Reina and the baby. The transport home was nerve wracking but all of us arrived in one piece. 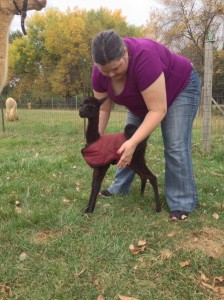 My husband and I are Baby Boomers who live in Central Illinois. We are embarking on a new adventure with one of our kids, Alexis and our Grandchildren, Pete and Maddie. After falling in love with alpacas, we purchased three, two adult females (one is pregnant) and a 2 month old male. This is our story.
View all posts by Lynne →
This entry was posted in Uncategorized. Bookmark the permalink.